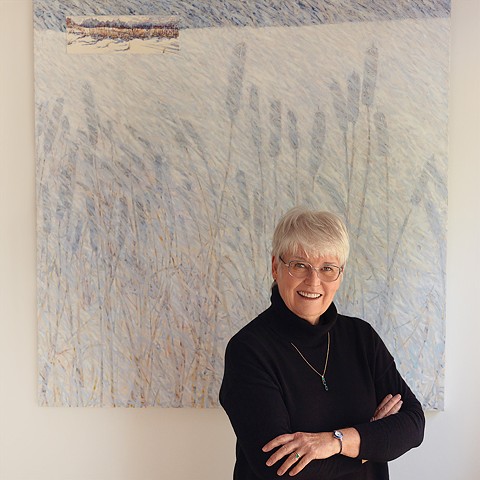 About Nancy H. Shand: Understatement, subtle coloration, intensive detail and complex composition distinguish the exquisite art of Nancy Shand, an artist whose work dwells on landscapes, both real and imagined.

Trained at Southeastern Massachusetts University, Arizona State University and the Barnes Foundation (in PA), Shand has maintained an active studios in New Jersey and Rhode Island for over three decades, working in a variety of media ranging from oil on canvas to pastels, mixed media and, on occasion, sculpture (with found objects).

Shand’s exploration of natural forms, the play of light and shadow, the complex intertwining of shapes and the blending of unusual colors has garnered significant attention and awards over the years. The recipient of two NJ State Council on the Arts grants and one from Hahnemann University College Library Gallery, the artist has exhibited her work in over 20 juried and invitational shows and held 9 one-woman shows. Her works are found in numerous private collections in the US and Europe, in the New Jersey State Museum in Trenton and in the corporate collections of AT&T; Champion Paper Company; Chubb; Cigna; Deloitte, Hasking and Sells; Educational Testing Service; Johnson and Johnson; McMasters and Carr; Minet Insurance; Schering-Plough Corporation; Sibson; and Squibb, Inc.. Also in recognition of her talents, Ms. Shand has received corporate commissions from Johnson and Johnson, Sibson, Schering-Plough Corporation, twice from the Educational Testing Service, and twice from Chubb. Dr. Lynn Siebert, Arts Council of Morris County (NJ)